Today, Wednesday 15 May 2019 is International Conscientious Objectors Day, a day to remember those people who said “NO” to being part of the military machine of war. You can read about some of them at https://www.menwhosaidno.org/ but this is the tip of the iceberg, there are men, women and even children around the world who say no to the violence of war and suffer the consequences. Here in Britain that may involve ridicule, persecution and even prison but in some countries it could involve torture and death.

Let us spend some time today remembering those who, for whatever reason, refused to take up arms against others and suffered as a result. May we gain strength from their witness that we might work for love, respect and well-being for all.

Remembrance is not enough

A special service of more than just Remembrance on the eve of the centenary of the ‘War to end all wars’ is taking place on Saturday 10th November 2:30pm – 3:30pm at Mill Hill Chapel in City Square, Leeds. The guest speaker at this service will the Anglican theologian Andrew Shanks.

The Justice & Peace Commission are working with the Leeds Pax Christi Group to put on this event and prepare a special liturgy booklet that is being shared across parishes in the Leeds Diocese.

The point about remembering the past is to make sure we do better in the future! 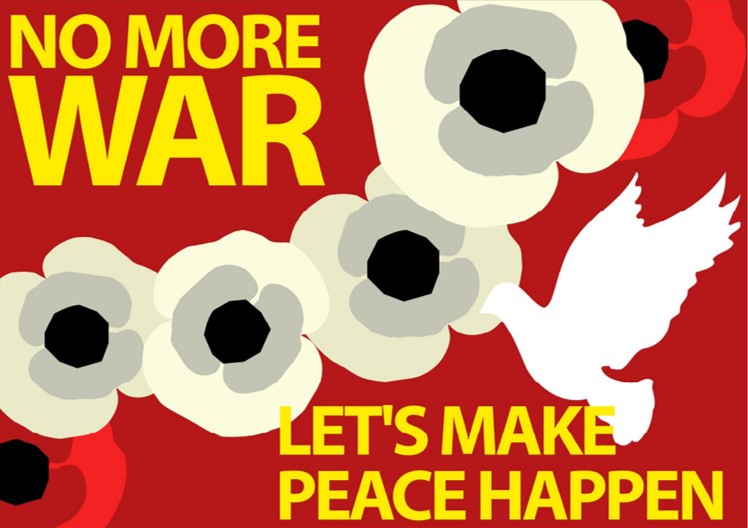 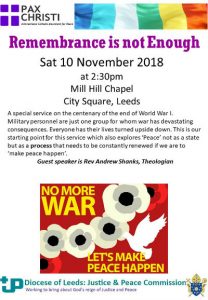 Next Tuesday is International Conscientious Objectors Day, it is marked around the world each year on 15 May. In London each year a brief ceremony is held at the Commemorative Stone, during which the names of representative people who ‘maintained the right to refuse to kill’ are read out and white flowers are laid on the Stone for each of the people remembered.

Lead us from death to life,
from falsehood to truth.
Lead us from despair to hope,
from fear to trust.
Lead us from hate to love,
from war to peace,
Let peace fill our hearts,
our world, our universe.
Let us dream together, pray together, work together
to build one world of peace and justice for all.
Amen.

Week of Prayer for World Peace

Lead me from death to life, from falsehood to truth
Lead me from despair to hope, from fear to trust
Lead me from hate to love, from war to peace
Let peace fill our hearts, our world, our universe

You can find prayers and meditations for each day of the week on their website. Join with people across the world of all faiths and backgrounds in praying and working for peace in the World.

Every year, 15th May marks International Conscientious Objection day – a day to celebrate those who have and those who continue to resist war, especially by refusing to be part of military structures.

100 years ago The Great War was raging in Europe – we now know it as the First World War – and those who objected to the war and refused to be conscripted could be imprisoned, many ended up doing hard labour in Dartmoor prison, civilian ‘work of national importance’ or conscripted into the Non-Combatant Corps. Some volunteered to serve in the Friends Ambulance Unit or other medical organisations but if they were drafted into the army (some by force) they could face a court martial and even be shot. Many famous people were conscientious objectors but for a long time their stories were suppressed as the government thought that conscientious objection would weaken the war effort. There are some links at the bottom of this blog to some resources about conscientious objectors.

Whatever your views are about the armed forces, Conscientious Objectors have played a major role in the protest against war and the campaign for peace. On our website we have the International Prayer for Peace, a prayer that we long to see answered:

Lead us from death to life,
from falsehood to truth.
Lead us from despair to hope,
from fear to trust.
Lead us from hate to love,
from war to peace,
Let peace fill our hearts,
our world, our universe.
Let us dream together, pray together, work together
to build one world of peace and justice for all.
Amen.

Subversive Peacemakers: War Resistance 1914–1918: An Anglican Perspective by Clive Barrett (I have a copy of this if anyone wants to borrow it – Paul)